His use of irony, puns, alliteration, and paradox.

Embodying the intellect of his literary contemporaries Marcel Proust and James Joyce, Marcel Duchamp (1887–1968) has been aptly described by the painter Willem de Kooning as a one-man movement. Jasper Johns has written of his work as the “field where language, thought and vision act on one another.” Duchamp has had a huge impact on twentieth-century art. By World War I, he had rejected the work of many of his fellow artists as “retinal” art, intended only to please the eye. Instead, Duchamp wanted, he said, “to put art back in the service of the mind.”

Born in Normandy in northern France, Duchamp traveled back and forth between Europe and the United States for much of his life. His initial foray into modern art followed the trends of his contemporaries, with his first paintings in the mode of Cézanne and the Impressionists, while after 1910 his work reflects a shift toward Cubism. One of his most important works, Nude Descending a Staircase (No. 2) (1912, Philadelphia Museum of Art) (a second version of a work on cardboard from 1911), however, reflects Duchamp’s ambivalent relationship with Cubism. He adopts the limited palette of Cubist paintings, but his invigorated figure is in a state of perpetual motion—a very different effect from Picasso and Braque’s Analytic Cubism that held figures tightly in place. Provoking negative reactions from even the Parisian avant-garde, the painting was rejected by the Salon des Indépendants for both its title and the artist’s mechanistic, dehumanizing rendering of the female nude. The following year, it sparked controversy at the New York Armory Show, helping to establish Duchamp’s reputation as a provocateur overseas and paving the way for his arrival in New York two years later.

Subverting traditional or accepted modes of artistic production with irony and satire is a hallmark of Duchamp’s legendary career. His most striking, iconoclastic gesture, the readymade, is arguably the century’s most influential development on artists’ creative process. Duchamp, however, did not perceive his work with readymade objects as such a radical experiment, in part because he viewed paint as an industrially made product, and hence painting as an “assisted-readymade.” Moreover, he had already begun to incorporate chance operations into his practice—for example, with 3 Standard Stoppages (1913–14)—and thus had already begun to surrender artistic control and empower other factors to determine the character of a work of art. With Bicycle Wheel (1913), the first readymade, Duchamp moved toward a creative process that was antithetical to artistic skill. He wanted to distance himself from traditional modes of painting in an effort to emphasize the conceptual value of a work of art, seducing the viewer through irony and verbal witticisms rather than relying on technical or aesthetic appeal. The object became a work of art because the artist had decided it would be designated as such. Bicycle Wheel consisted of a fork and the wheel of a common bicycle that rested upon an ordinary stool. The mundane, mass-produced, everyday nature of these objects is precisely why Duchamp chose them (later works would include a snow shovel, a urinal (Philadelphia Museum of Art), and a bottlerack (Philadelphia Museum of Art), to name a few). As a result, he ensured that the fruits of modern industrial life would be a fertile resource in the production of works of art.

Naturally, Duchamp’s iconoclasm appealed to the vehemently untraditional and bitingly critical nature of the Dada movement. His work can easily be understood as a forerunner to this revolutionary sensibility, which actively sought to undermine the reigning values of conservatism that governed Europe and that perpetuated the devastating reality of World War I. Duchamp’s own experience with Dada, however, occurred while he lived in New York, in the circle of Francis Picabia, a Franco-Cuban artist and writer, and the American painter and photographer Man Ray, as well as the American collectors Katherine Dreier and Louise and Walter Arensberg. The nature of New York Dada was less overtly political than its European strain. Instead, satirical works such as Duchamp’s readymade Fountain (1917) tested the limits of public taste and the boundaries of artistic technique. By pushing and ultimately transgressing such boundaries within the art world, Duchamp’s works reflected the artist’s sensibility. His use of irony, puns, alliteration, and paradox layered the works with humor while still enabling him to comment on the dominant political and economic systems of his time. 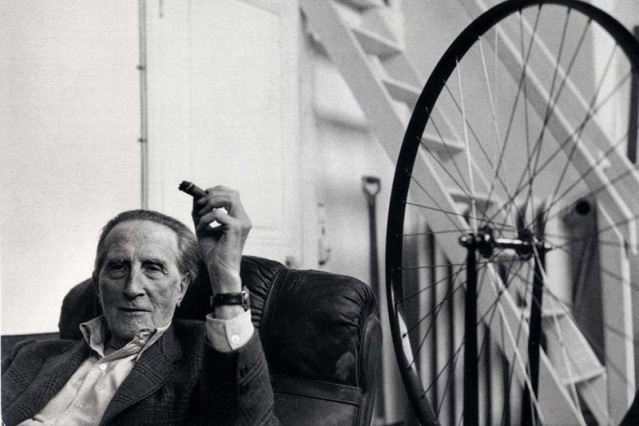 The Bride Stripped Bare by Her Bachelors, Even (1915–23, Philadelphia Museum of Art), also known as The Large Glass, can be seen as summarizing Duchamp’s view that painting and sculpture were fundamentally incompatible and inadequate as art forms with which to render and reflect contemporary cultural life. His extensive preparatory drawings, writings, and studies for The Large Glass (many of which are contained in The Green Box of 1934) indicate his development away from realistic representations of forms to a more abstracted, mathematical mode of connoting the real world. His artistic evolution must therefore be understood as an assault on traditional artistic practices and a desire to accommodate a modern-day fascination with industrial processes and products.

Although in the 1920s, Duchamp famously renounced artmaking in favor of playing chess for the remainder of his life, he never fully retreated from his quintessential role as artist-provocateur. Duchamp is associated with many artistic movements, from Cubism to Dada to Surrealism, and paved the way for later styles such as Pop (Andy Warhol), Minimalism (Robert Morris), and Conceptualism (Sol LeWitt). A prolific artist, his greatest contribution to the history of art lies in his ability to question, admonish, critique, and playfully ridicule existing norms in order to transcend the status quo—he effectively sanctioned the role of the artist to do just that.

Nan Rosenthal Department of Modern and Contemporary Art, The Metropolitan Museum of Art.